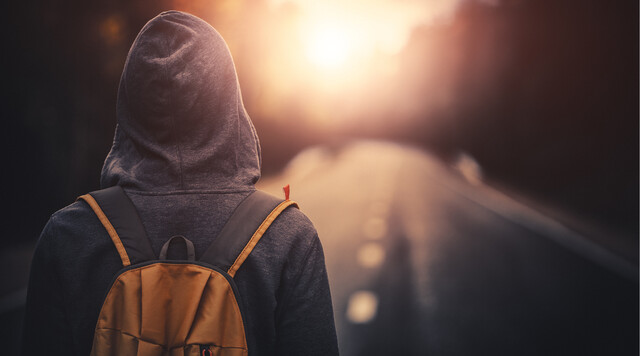 Chris had been through a lot and was struggling with day-to-day life.

As a kid, he was bullied because his father was a police constable. “I was terrorized daily on my way to school which included violence like punching to stop me from getting on my bus.” Once, the brakes on his family’s car were cut and he was even tied up in a fish net and thrown onto ice.

“I don’t remember ever getting help back then or talking to anyone,” says Chris. In high school, Chris began taking drugs and drinking alcohol. He never really had control of his life even though there were times he was drug and alcohol-free.

Later in life, Chris dealt with his mother’s suicide attempt.

He also went through a divorce, bankruptcy, a drive-by shooting, and a fatal workplace incident for which he provided first response for.

In November 2016, Chris attempted suicide and was taken to the hospital. That is when Chris contacted The Family Centre and began seeing a mental health therapist every week. Chris learned that he had developed PTSD because of abandonment issues “It was remarkable, The Family Centre really helped me ‘flick the switch’.”

Chris began the Strive program, and although it was a hard process, he felt like he was changing and evolving. He loved coming to The Family Centre each week for his counselling and Strive sessions. Now Chris volunteers his time where he can how he can “I am helping others where and when an opportunity arises,” says Chris.

Chris is also working for a company that he loves and that values him. They believe he makes situations have positive outcomes. He has recently returned to a relationship with his fiancé and has been granted time with his kids through a court order.

“There will be many more hills and mountains to climb but the Strive program helped me stand and progress. Now when I get down or depressed, it’s half a day, not a week or months or years,” says Chris. “I don’t look for a substance to help me escape. I am attacking life and taking mine back and am developing into the Chris I want to be.” Each day Chris works towards being the best version of himself.  He makes time daily to practice meditation, prayer, and the things that make him feel worthy and good.

If you have struggles similar with Chris, we recommend you to look into the resources below:

Mental health resources on our blog

Depression resources on our blog