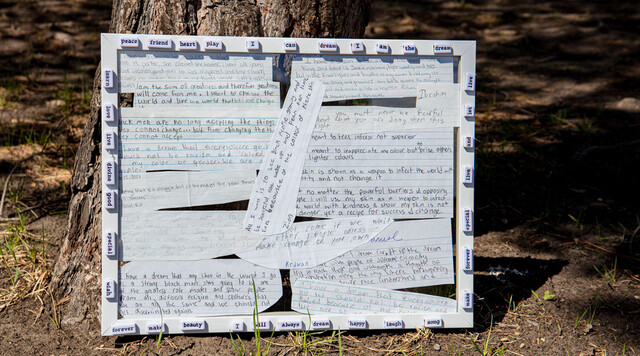 Black History Month honours the achievements and contributions of Black Canadians. Each February, Canada celebrates and acknowledges the impact of the Black community in our society. This year, students from John D. Bracco school celebrated what being Black meant to them.

CBC radio approached the school to creatively contribute something for Black History Month. Maryama Addow, a Success Coach with The Family Centre and thirteen grade nine students jumped on the opportunity. The students were eager to produce a piece of work that was representative of them all. This led to the idea of creating a poem that they could all read together on the radio.

“They decided that they wanted to talk about both the positives and the negatives about what it is to be a Black person and specifically a Black student,” mentioned Maryama.

Each student wrote a couple of lines that focused on their own personal experience. Some focused more on the Canadian experience, or important figures in Black history.

After, Maryama worked with three of the students to take the root of those ideas and put them into a poem. The students’ creative direction focused on the poem moving from a struggle to a success.

Maryama found this opportunity to be extremely monumental for the students. “It was really important for them to be on such a huge platform. Maybe those are things they never would have experienced before. So, they wanted to jump on the opportunity and be able to make an impact because they believe they are impactful people.” An impact is exactly what they had made.

The students received tremendous feedback once the poem aired on CBC.

“We got an email from our superintendent actually just saying how moving of a piece it was and how he was really proud of the students. The school itself was very proud of it. When other people had heard it and to see how much of an impact it made on them I think made the students understand this is a really big thing that they were a part of.”

They even had the opportunity to read the poem to their class after it had made its debut. The students were emotional and extremely proud to share what they had created with their peers. Maryama was overwhelmed with how this heartfelt piece of work was received. “It was just very comforting to see them be celebrated authentically for who they are, for the mere fact that they are Black students and that this is their life-lived experience was such a beautiful thing to witness and be a part of.”

Below is the poem that was featured on CBC radio, written by Edmonton students:

I was meant to feel inferior, not superior

Instead, I will be the one to inspire others

They weaponize my skin to infect the world with depravity

I will use my power to flip the script

No matter how many times they think I am unequipped

Moving from limitations to congratulations

I’m a lion hear me roar and see me win

Where they can grow and succeed

And not be chased by police

Change will not come if we wait for others, we have to make our own

I want to be proud of my skin, whatever shade of brown

Greatness with no limitation is where I am bound

Stand up and put on our crown