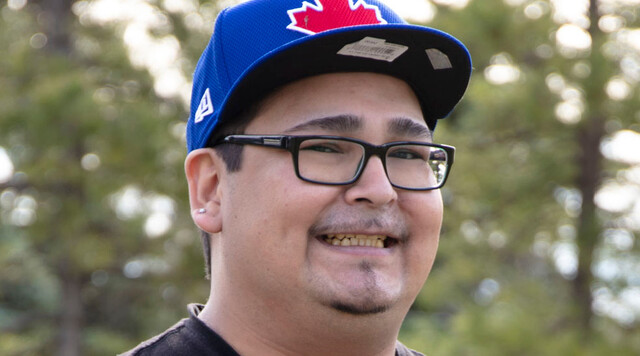 “I was agitated and angry,” said Calvin. “She never asked me for help.”

Calvin was upset because their mother would take them away from him for long periods of time. He knew that this was his opportunity to step in. Only one of the girls is his biological daughter but it didn’t stop him from viewing both of them as his own.

He made the journey down to Edmonton to be reunited with his family. When he arrived, he met with their social worker. Calvin had to prove that he was a stable parent before he could get custody of his daughters.

“It was a long year and a half of courts and programs I had to get through. They had a program there that was on how to be a parent. So, I took that.”

Calvin’s hard work paid off. When he got custody of his daughters he met Trina, a Roots and Wings worker with The Family Centre. Trina helped them settle into their new home and connected them with family resources. At first, Calvin felt very guarded and didn’t want to speak much to Trina. As she continued to support him, Calvin was able to open up.

One day Calvin’s sister reached out to him as she was going through challenges in her life.

“My sister said that she needed help to stable her life. So, I stepped up and told her I'll come pick up her kids and take them in until she stands up on her feet again.”

Two of his nephews and one niece came from Saskatchewan to Calvin’s home in Edmonton. Trina helped Calvin apply for guardianship of the three children.

Over time, the kids settled in and wanted to stay with Calvin. Unfortunately, Calvin had to set boundaries for one of his nephews who was going down a bad path. His nephew became a safety issue for the rest of the family and had to move into a group home.

“It was difficult because I really wanted to help the kid.”

Growing up, Calvin experienced abusive behavior from his role models. He is determined to show his kids healthy discipline and raise them differently.

“I'm just trying to break the cycle and I don't want anybody to feel that way,” expressed Calvin.

Calvin is grateful for the support from Trina. He feels their relationship has really grown since when he first met her. Trina continues to take Calvin and his kids to appointments and provide them with resources for stability. He believes that the Roots and Wings program “will help families strengthen themselves.”

Each day, Calvin focuses on personal growth and hopes that his children achieve all the goals they set for themselves. He is a proud father who loves to help his children, nephew, and niece with their homework and is happy they are engaged in school.

As the pandemic gets better, Calvin hopes to get a dress made for his daughters and niece and to attend pow wows. In the meantime, Calvin and his family enjoy nature walks with Trina.

If you can relate with Calvin in any way, consider viewing the resources below: