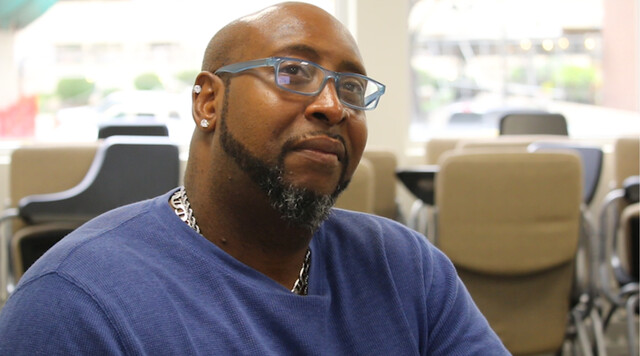 Ainsley, a burly and tough security guard, found out how strong he truly was after joining Strive. At first, Ainsley was hesitant to join the therapeutic group for men recommended by his mental health therapist. He didn’t feel comfortable opening up in a group setting. It wasn’t until Ainsley hit rock bottom that he decided to sign up for the program.

Walking into his first session, Ainsley wanted to be in control of his experience. He thought to himself, “I’m here, you can’t tell me anything. Take it or leave it.” But, he soon softened up when the other men in the group began talking. “I heard people introduce themselves and explain why they are there and I realized, I’m not alone.”

Ainsley soon learned that he was bringing past trauma into his relationships. “All my relationships were the same patterns so I figured that’s what a relationship is.” He knew that he needed to change the patterns of who he was as a person and let go of his anger and aggression. “People are quick to judge, that’s a big guy - he can handle himself. No, I have problems as well.” Strive helped Ainsley figure out who he is and realize that it is OK to hurt and to express himself.

Since Strive, Ainsley has seen a drastic improvement in his relationships. He can now see another person’s perspective, stay calm during interactions, and listen more. Usually, Ainsley would be the first to react in situations. Now, his new level of patience even has his mother shocked.

Near the end of the program, Ainsley became a leader in his group. He would begin the conversations when other men were uncomfortable sharing. His goal was to create a safe environment where everyone could work together as a team. “I didn’t want to miss any days. Every day was something new, something special.” Ainsley believes that every man should take Strive and should learn about it in school. He even plans to retake the program in a year to refresh his knowledge.

Currently, Ainsley is looking to take his career to the next level and become a correctional officer. He learned that the position can be very hard and emotional. But, he believes that what he has learned from Strive can help him to cope with the job’s struggles.

Each day, Ainsley carries his notes with him and refers back to them when he isn’t feeling his best. He feels that if Strive can help him, it can help anyone. “I thought I was going to be the grumpy, aggressive Ace until I died. I’m a completely different person. It’s a blessing.”

If you can relate with Ainsley and want to be better at handling uncomfortable emotions, check out these resources that can help you cope with life's struggles: