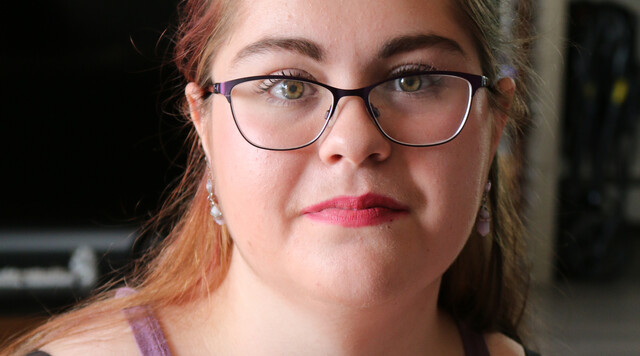 Two days before her eleventh birthday, Jessica’s father passed away in a motorcycle accident. Then five years later, her mother succumbed to brain cancer. Her mother was diagnosed when Jessica was three and was sick for thirteen years. Jessica was a caretaker for her mother for a long time and had to grow up fast. “That was really hard. I was practically her nurse for a lot of my life,” says Jessica.

After the first year of her father’s death, Jessica was molested by a close family member. “I didn't know how to tell anybody. My mom had cancer, my dad was dead. You know, it was very hard.” She went to a youth centre and explained what had happened to her. Three weeks later she was introduced to a caseworker.

Throughout her life, Jessica had seen many counsellors. It wasn’t until she began working with Kristen, a mental health therapist at The Family Centre, that her mindset began to change. Kristen helped Jessica take a step back and allow herself to be a kid for a little bit longer. “I've always been a lot older than I think I am like mentally because of everything that I've been through. She definitely helped me see that I needed to back up.”

Jessica began seeing Kristen three weeks before the COVID-19 pandemic started. “We didn't really get too much of a face-to-face connection before we had to start on video.” Jessica was happy when video chats became available. She preferred meeting over video than the phone. “I can see her. I can connect with her. I can see her facial expressions. It's just a lot easier to tell that she’s really listening.”

At the beginning of the pandemic, Jessica was extremely fearful of what was going to happen. Her NAIT classes moved online which caused her a great deal of anxiety. “My counsellor definitely helped me get through a lot of my anxieties and fears with going online.” Kristen then encouraged Jessica to get back into the things that make her happy. She and her boyfriend have occupied themselves be creating an art wall in their home.

Before the pandemic, Jessica also attended The Family Centre’s Women & Anger class. The class helped her control her anger as she was getting mad at very small things. “They really did give me a lot of the tools that I needed to become where I am today. They taught me to notice the signs. My relationship has very much grown because of that.”

Along with the class, Kristen has helped Jessica shift her perspective. She now has an easier time putting herself in other people’s shoes. Counselling with Kristen during this time has given Jessica confidence and reassurance. “Her words definitely stick with me and I think that's what I personally need most in a counsellor is to have their words stick with me in a time where I'm not OK.”

Jessica is currently upgrading with the hopes of attending business school. She dreams of opening a restaurant for troubled youth. “I would like to be the setting where youth can come into work and feel safe.” Jessica’s overall goal is to be a good person and to continue to care for others.